On September 30 Bishopstone, Newhaven Harbour, Southease and 12 other stations were added to GTR’s Penalty Fare Zone.

When asked how the public would be informed of the change status of those stations, a GTR spokesperson responded:

Posters will be installed at these stations to inform passengers of this change. In addition, passengers will be advised on Customer Information Screens and through Public Announcements at the station.

Dubious Positioning of Posters at Bishopstone

During an inspection of Bishopstone station on Friday October 7 the following was noted:

Machines May Not Be In Working Order

The Permit to Travel machine was not working at the time of the inspection.  A lady at the station tried to purchase a permit but failed to get one.

She was also unable to buy a ticket from the ticket machine as it only takes cards and she only had cash.

The brand new ticket machine did seem to  be working but intermittently showed an Out of Order message, which may cause passengers to believe they cannot buy a ticket from it.

There were only 2 passengers at Bishopstone station at the time of the inspection.  Neither seemed to be aware that it was now a Penalty Fare station.

Despite GTR’s assurances, no announcements in relation to the scheme were heard either on the platform or from the train that stopped at the station during the inspection.

Is GTR Doing This Deliberately?

A cynical mind might form the impression that the poor placement of the posters – together with the apparent lack of proactive announcements to warn passengers of the requirement to buy a ticket before boarding – is an attempt by GTR to maximum its profits by trying to catch out unaware passengers and charge them an unfair Penalty Fares.

It is perhaps worth noting that GTR is indeed under an obligation to maximise profits in section 7.2 (d) of its franchise agreement.

However, there is no evidence to suggest the dubious placing of the posters is deliberate.  It is equally possible that the person placing the posters simply did not do their job properly.

Anyone who does not spot the new posters due to their location and then gets Penalty Fare may be able to appeal this as a breach of Penalty Fare Rule 7.3 (b) – on the basis that the posters were not placed in a sufficiently prominent location. 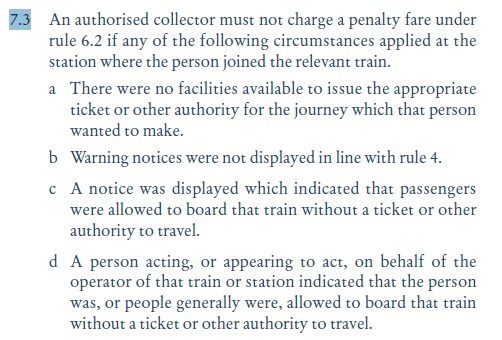 Anyone who only has cash should get a Permit to Travel if the machine is working.  But if you have to board a train without a ticket or permit and then get a Penalty Fare, you could appeal it as a breach of the Penalty Fares Policy document section 4.30 – third bullet point below:

Click here for more detail of concerns about the Penalty Fare Scheme.

It is worth noting that today (Sunday 9 October) Southern’s own Penalty Fares page on their website still lists these stations as exempt from Penalty Fares, which could mislead passengers into thinking they do not need to buy a ticket before boarding. 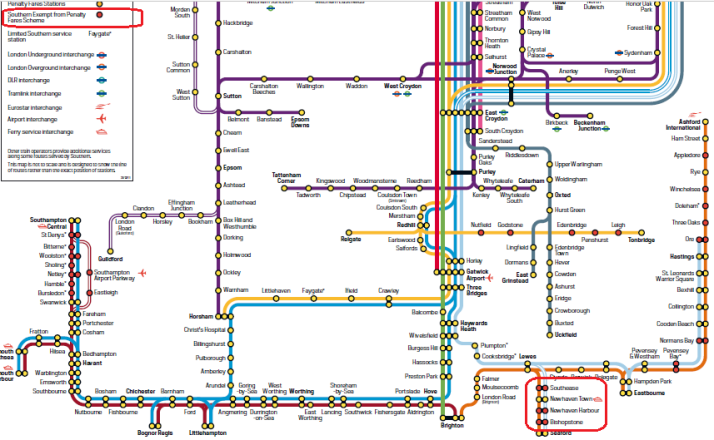